Sorry no interent for you, we must go protest 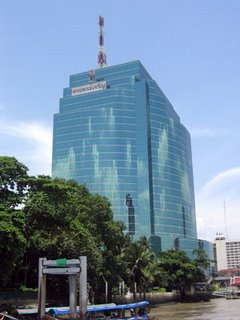 Please don’t mess with my internet…

CAT Telecom labor union which earlier planned to cut the country international circuit telecommunications gateway Wednesday afternoon in support of the demonstrators demanding for the ouster of the coalition government has postponed the decision until 9am Thursday.

The CAT Telecom labor union had said it would make a decision Wednesday afternoon whether or not to cut the international circuit telecommunication or gateway. Disconnecting the gateway would affect access to the Internet and international telephone services as well as financial transactions.

And for a rough overview of PAD (People’s Alliance for Democracy), how’s this: (wsj)

Mr. Sondhi and other PAD leaders are demanding the dismantling of Thailand’s current system of parliamentary democracy. In its place, they want a new system of government in which elected politicians constitute no more than 30% of Parliament, with the rest of the governing body to be appointed by the military or other elite groups.

One response to “Sorry no interent for you, we must go protest”