The government will win the waiting game

Is the best solution for the government to wait it out? 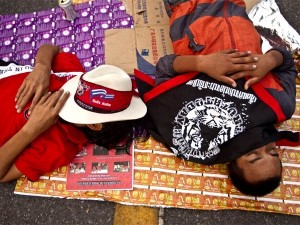 From a piece by Imtiaz Muqbil:

In what could be an entirely new new chapter in the history of handing public protests, the Thai government has effectively stalemated the red-shirts. Far from buckling, as the red-shirts had expected, the government now believes that time is on its side, and appears willing to wait it out. Effectively, this has put the onus back on the red-shirts to decide how much longer they can wait. The weather is getting hotter, and the monsoon rains are on the way. Major counter-protests against the red-shirts are emerging. Life could become increasingly uncomfortable on the streets where the red-shirts are camped in wretched conditions. At the political level, not only will a waiting-game further bleed the coffers of the Thaksin camp, further attempts to disrupt daily life is likely to see the red-shirts face an even stronger backlash in a future election.

Most important, the government is hoping that waiting-game strategy will put the red-shirts’ leaders under further pressure to deliver results to their followers and/or explain why they are failing. So far, the government is abiding by the classic principles of not rushing to action but examining the broader ramifications and implications of all possible courses of action – slow and steady will win the race, haste will make waste, patient is a virtue, the rule of law is the best option, take the long-term view, and perhaps most important, do not submit to blackmail.

2 responses to “The government will win the waiting game”