Things have gotten worse since Thursday

There is a good article at the Economist called No End In Sight, but I think an even better comment by Felix Qui.  Also some really great photos at CNN. 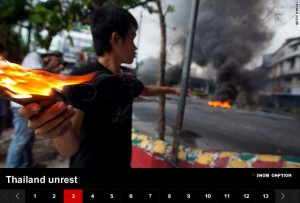 I live on Silom Road, near the blockaded area.
Until Thursday evening, things were daily becoming more and more normal apart from the presence of lots of fresh faced young conscripts seeing life in the big city and the odd stretch of razor wire, even the night life was picking up again. That all changed with the shooting of Thai army general Kattiya on Thurday evening, at the beginning of the current crackdown, which has not been quick, smooth or obviously effective as the continuing shooting, fires and skirmishes prove.
Silom Road is now dead. It’s more silent and eerie than it was during the coups I’ve lived through here over the past 20 years. It’s also more scary. It would be useful to know who shot Kattiya and on whose orders. Lots of speculation so far, and what it all has in common is that the guess being made tends to serve the view of the person making it.

The Red leaders were fools not to jump for the face saving offer of a Nov. 24 election, and things have deteriorated since, as I guess someone wants them to. Presumably not Kattiya any longer, though until his shooting, he was the one I thought most likely to want to push for a more violent escalation, and the most capable of inspiring and leading such a move by the Reds, as shown by his intemperate raid on Chula. Hospital and the subsequent conflicts with other Red leaders.

Awful as the current days of violence are, what comes after them will be far more crucial for Thailand’s future. Whether the Reds are being funded by Thaksin or other deep pocketed groups, and whatever the motives of their leaders, it is certain that there is a very real and very widespread sense of betrayal, injustice and double standards throughout the majority of the country. The divides run deep between the Bangkok elite and the people of the rest of Thailand; if Abhisit and his masters merely suppress the current protest without taking real steps to reach out to all Thai people, and if they fail to make radical changes to the social, political and legal system, then the stage will be set for far more explosive protests sooner rather than later.

Thailand desperately needs mechanisms installed so that the Thai people’s voices can be heard and so that those voices can be respected, not overturned by the army or a mob of Yellow clad People Against Democracy (the PADsters) in Bangkok who look down on the rural majority with contempt. In a well functioning state, the Reds would not have been able to escalate their protest to such a point, in imitation of the tactics of the PADsters, who after occupying government house for months on end then occupied Bangkok’s international airport for over a week to enforce their will on the entire Thai nation contrary to the repeatedly expressed will of the Thai people in a series of elections. That the Yellow PADster leaders continue to run free and have recently come out to categorically oppose the offered peace plan is not helpful.